The Spacebar is a social application for gay people to flirt with each other in virtual reality. By chatting, poking, and more, people can show their affections and have fun safely in the bar-inspired place. I aimed to explore social interaction, especially flirting in VIrtual Reality.

In this thesis project, I designed the interactions, created avatars and assets in blender, and implemented with Unity and Oculus Quest. 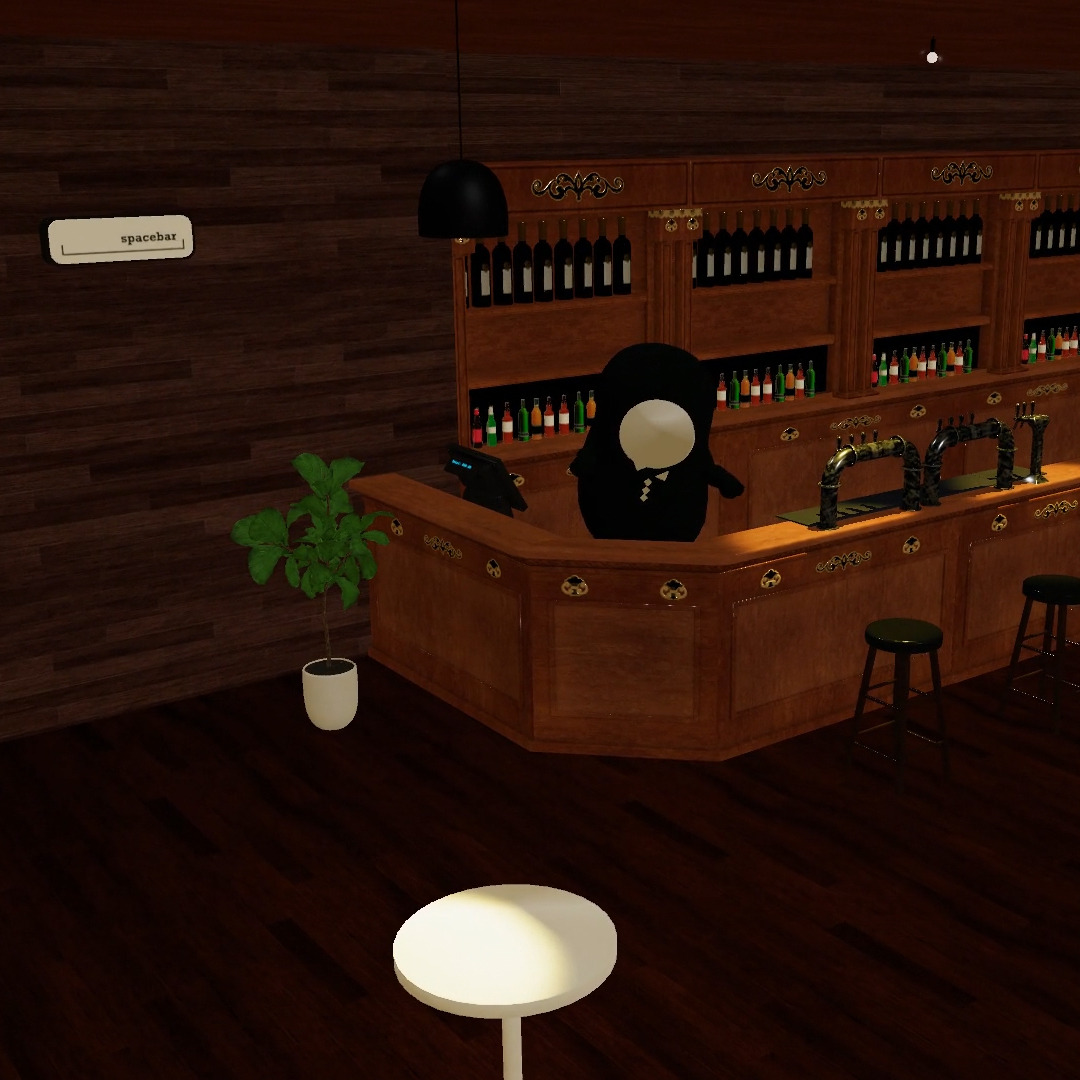 Our behaviors of flirting change with the venues, occasions, and mediums. How we act on zoom dating is much different from when we are at a bar, and this makes me curious that how will flirting in virtual reality(VR) be like?

Many people start to meet each other on several social VR platforms, but almost none of them are designed exclusively for dating or flirting. Moreover, many of these applications are not age-restricted, making it hard to share sexy conversations there. When I observed and interviewed users in the applications, they complained about the harassment and toxic behaviors. Most of the safety systems in those applications are poorly built, making it hard to block or report other users. Gradually, users feel less secured and less willing to try social VR applications.

As a designer, I wonder,

How to create a place for people to enjoy the romantic connection safely in VR by UX design?

First, I sketched out the whole application structure by user flows. Through it, I got a better understanding of how users will experience this application. First, user will go over an onboarding session, and then explore the environment and talk to people, when they get closer, the users can chat offline if there is a possibility. 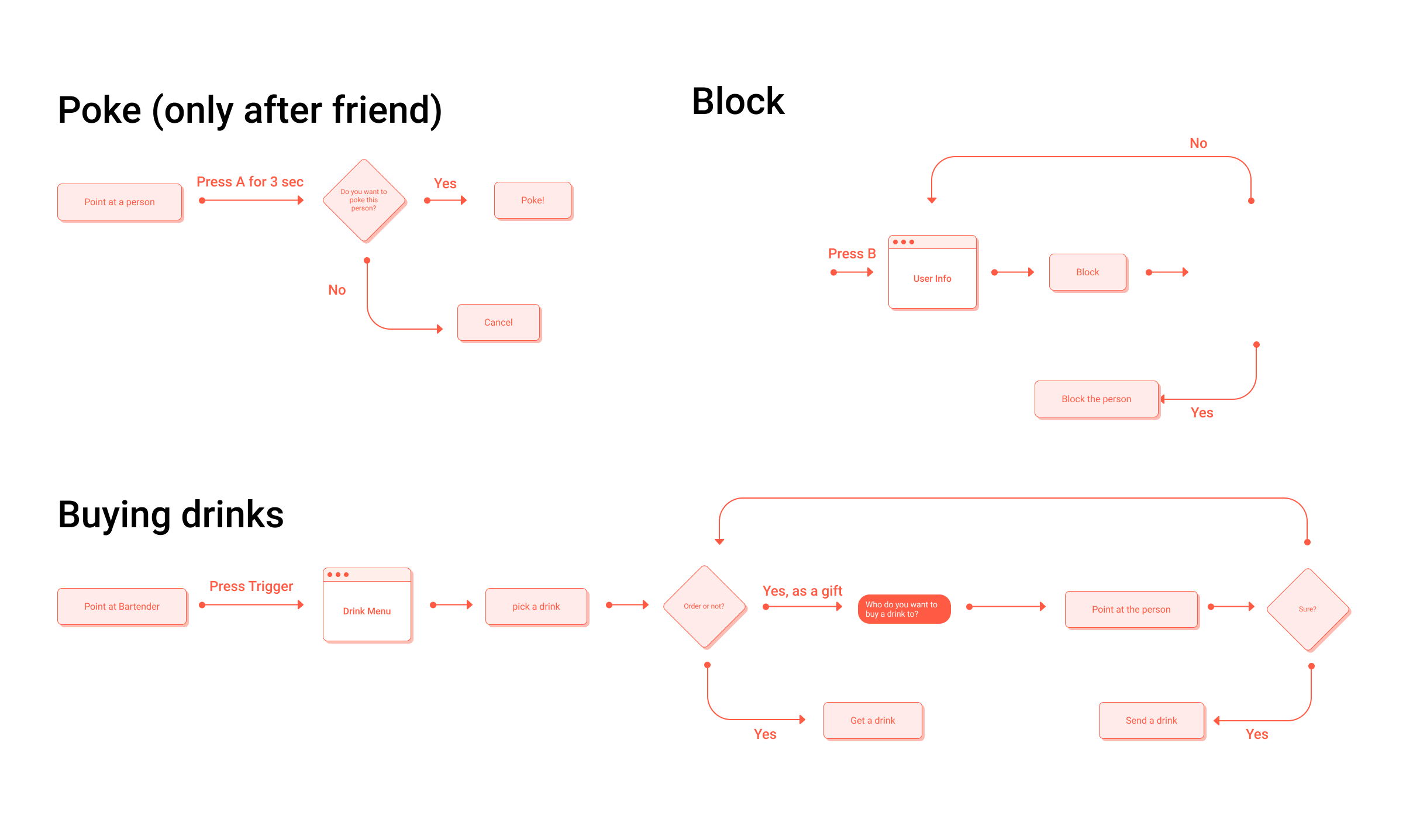 Part of the user flows of features

For the safety issue, I was inspired by Edward T. Hall's zones of interpersonal space and Michelle Cortese's speech on Harassment in VR, and developed a social structure called "Friend Level". Friend Level simulates the natural friendship development in a digital space. In the level, people's relationship are sorted into three level: strangers, friends, and meteors. When people first meet each other, their relationship will start from stranger level. The status will change when both of the them agree to bring their relationship to next level. Some of the features are only available after reaching certain friendship level, just like in real life, we are allowed to do some interaction only after we are familiar with each other enough. 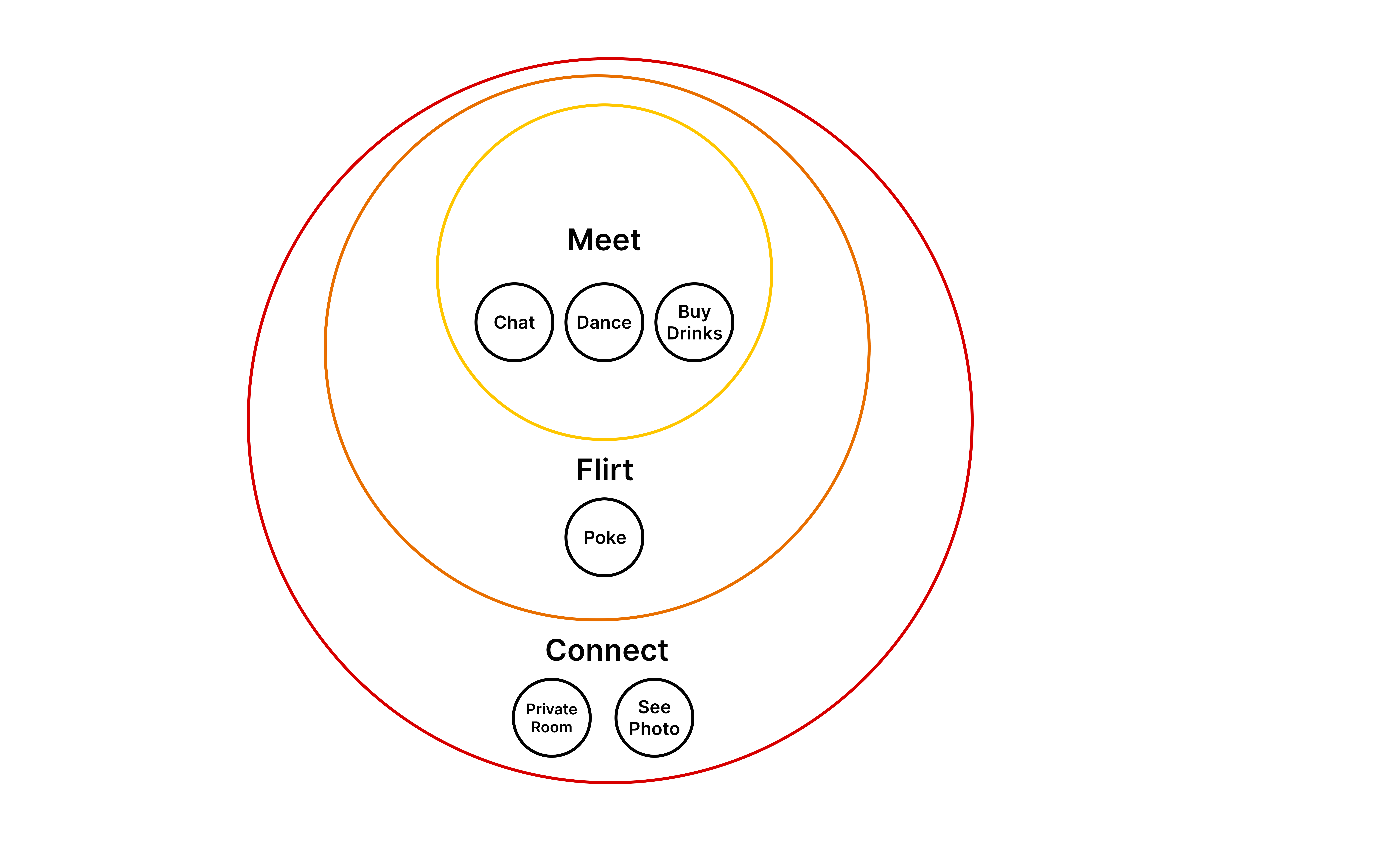 Friend level in The Spacebar.

When a new user comes in, the community guide(bartender) will help them set up the profile, fill up their interest field, and make match suggestions based on the preference.

After onboarding, people can explore the place and connect with others freely, while some of the feature will be only available when both of the users are friend to each other.

When the friendship reach the highest level, they are able to see the actual photo of each other and create a private room for an exclusive and steamy conversation.

The user-friendly safety system helps users to get away from toxic behaviors and harassments within a click.

The behavior of social interaction changes with the evolution of technology and community
constantly, and I would love to keep improving the experience of this project.

First, I will implement the multi-player system, and ultimately release this application on Oculus Lab. Also, I will add a dressing room for users to customize their texture of the skin. Second, there will be even more rooms and activities to add more fun into this application. Security and safety is always my priority, and I would love to improve the current system. I plan to introduce "mute" and "reputation" system, to bring the community into the safety system design.